Here at Clara's we are blessed with a great many loyal, longtime customers. One of the best is Tom J. Doody, who has been coming in every Saturday for more than twenty years!

During World War II, Tom served in the 20th Fighter Group in Kingscliff, United Kingdom. He was part of the 55th Fighter Squadron flying over 50 missions at the ripe young age of 21. Tom is a wealth of incredible stories about his flying days including escorting bombers on their missions. If you would like to know more about Tom's fighter group, visit the LittleFriend website to learn more about Tom's fighter group. 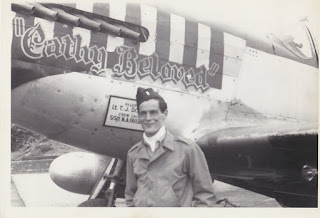 After WWII, Tom went on to become a scientific glass blower at Argon Laboratories. He raised a beautiful family and is blessed with many grandchildren and great-grandchildren! 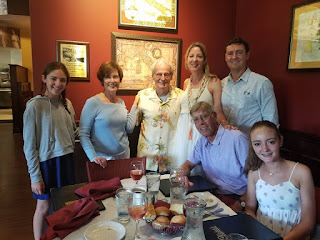 In honor of his 94th birthday, we at Clara's had a special present for him. This past Saturday, we revealed a dedication plaque at Tom's favorite table, "table 111," now know as "Tom's Table!" 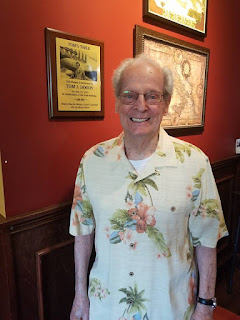 Email ThisBlogThis!Share to TwitterShare to FacebookShare to Pinterest
Labels: History

Clara's
A Taste of Italy in Woodridge: A Southern Italian Restaurant. Welcome to Clara’s. We hope to provide you with a memorable dining experience rooted in the traditions and recipes handed down from my father Anthony and my mother Mama Celeste Lizio. Since 1987, our family has enjoyed serving your family our fresh homemade pastas and sauces, fresh seafood, handmade stone pizzas and delectable veal and beef dishes. Buon Appetito!!